Aulterra is a homeopathically activated combination of natural paramagnetic and diamagnetic elements which neutralize the effect of man-made EMF exposure on human DNA.

Man-made EMFs have a chaotic energy and different frequency than natural EMFs and can disrupt or distort organic energy patterns. It is precisely this ability to distort human energy patterns that causes artificial EMFs to be hazardous. Human-made EMFs may cause cancer and present other grave dangers to human health.

Noted DNA researcher Dr. Maria Syldona recently completed a study in which she concluded:     ‘ . . . the natural coherent energy emanating from Aulterra neutralized the incoherent energy from the man-made EMF, rendering it harmless to human DNA.

Unlike other EMF blocking devices, the Aulterra Neutralizer will not affect cellular phone reception or transmission. Your phone will still be the convenient communications tool you wanted it to be–it will just no longer be dangerous to your DNA and your health.

The Aulterra Neutralizer™ Will Work on Any Cellular Phone

The Aulterra Neutralizer™ is effective against harmful EMF/RF radiation with any style of cellular phone.

The Aulterra Neutralizer™ Works on Other EMF Radiating Devices Too!

Cellular phones are not the only harmful EMF radiating devices in our homes or offices. If you have any of these electronic devices, you need the protection of the Aulterra Neutralizer™:

The Aulterra Neutralizer™ is Easy To Use. Just Stick it on and You’re Protected.

There’s no complicated installation procedure with the Aulterra Neutralizer™. The adhesive backed disc will stick to almost any surface and provide you with constant protection for as long as it remains on the device. Just apply it to any relatively flat, smooth surface on your cellular phone, or other device and you can feel confident again.

The reasonably priced Neutralizer™ will be a small price to pay for the safety and peace of mind that comes with knowing you and your loved ones are safe from the harmful effects of EMF exposure. Contact Aulterra or your health care professional today to get your supply of Aulterra Neutralizers™.

The latest studies confirm what the cellular phone corporations do not want you to know. Even casual use of a cellular phone can damage the DNA in sensitive areas of your brain. A landmark study conducted by Dr. Henry Lai of the University of Washington showed that even at low levels, exposure to electromagnetic fields and radio frequencies (EMFs/RFs) caused DNA damage to brain cells of rats resulting in loss of short and long-term memory and slower learning. Further he noted:

DNA damages in cells could have an important implication on health because they are cumulative.

Even using an earpiece will not keep you out of danger from EMF exposure. Earpieces act almost like ‘conduits’ to funnel as much as three times the harmful radiation to your brain.

Where can I find the Aulterra Neutralizer?

Disclaimer: All information on this site is provided for educational purposes only. By no means is any information presented herein intended to substitute for the advice provided to you by your own physician or health care provider. You should not use any information contained on this site to self-diagnose or personally treat any medical condition or disease. If you have, or suspect you have a medical condition, you are urged to contact your personal health care provider.

Your lymphatic system works hard to keep you healthy, and stress can slow it down. Relax with Electro-Lymphatic therapy while helping your body to detox naturally.

If you think wellness is expensive, try illness. 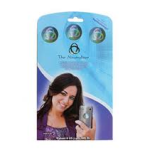 Laura is an affiliate for Aulterra's shielding devices.
Click Here to Buy!